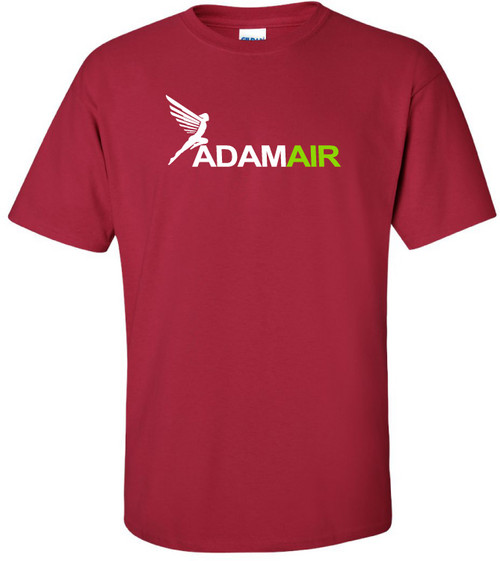 Adam Air, (incorporated as PT. Adam SkyConnection Airlines), was a privately owned airline based in West Jakarta, Jakarta, Indonesia. It operated scheduled domestic services to over 20 cities and international services to Penang and Singapore. Its main base was Soekarno-Hatta International Airport, Jakarta.

Although sometimes referred to as a low-cost carrier, it marketed itself as an airline which straddles between low-cost and traditional carriers by offering on-board service with meals, but at competitive prices, similar to the model adopted by Singapore-based Valuair. Prior to the crash of flight 574, it was the fastest growing low-cost carrier in Indonesia. Adam Air Indonesian Airlines Vintage Logo T-Shirt (white/green on texas orange or burgundy; texas/green on natural)

Incidents/Accidents
*Flight 782 On February 11, 2006, Flight 782, registration number PK-KKE, lost navigational and communications systems twenty minutes into a flight from Jakarta to Makassar. The plane was subsequently flown into a radar "black spot"
*Flight 574 January 1, 2007, air traffic controllers lost contact with flight 574 en route from Surabaya (SUB) to Manado (MDC). The aircraft, a Boeing 737-400 with the registration PK-KKW, had 96 passengers and 6 crew. On January 10, parts of the aircraft's tail stabilizer were found 300m offshore. The flight recorders and suspected debris were located, but were not initially recovered due to a dispute between Adam Air and the Indonesian Government over who should pay recovery costs.[
*Flight 172 On February 21, 2007 Flight 172, an Adam Air Boeing 737-300 aircraft flying from Jakarta to Surabaya with registration PK-KKV, had a hard landing at Juanda International Airport. The incident caused the body of the plane to crack and bend at the middle, with the tail of the plane drooping towards the ground. There were no reports of serious injuries from the incident.
*Flight 292On March 10 2008, an Adam Air Boeing 737-400 aircraft flying from Jakarta to Batam skidded 75 metres off the end of the runway while landing in Batam. All passengers survived, with two passengers treated for shock. The plane sustained damage to one wing.[14][15] This accident attributed to the airline's demise, just eight days later, and the formal revocation of its AOC two months later.