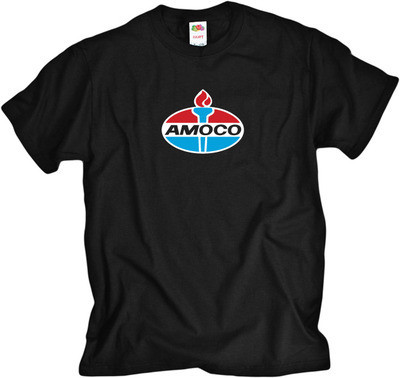 Originally known as Standard Oil Company (Indiana), this national oil icon was known as Amoco from 1985 until 2001 when it was acquired by British Petroleum (BP). Leading the way in great innovation, they were the first company to open the drive-thru service station in 1912 at a Minneapolis, Minnesota location. They also developed the gasoline tanker truck and founded the Hydrafac oil extraction process that led to an increase in worldwide oil production. Gas stations were also branded under Pan-Am, American, Utoco, and Standard throughout its long history (1889-2001).

The basic logo has remained much the same throughout its history. The logo as we know it today (1946) was under the Standard name and had the iconic circle with a torch overlaying it and the Standard name running across the middle. The colors of the logo were red, white, and blue and alternated in sequence top to bottom. Over the years, the logo changed slightly, becoming the sleeker and bolder Amoco logo that was used until 2001. All that is left of the Amoco name today is the use of it in 93-octane "Amoco Ultimate" gasoline at BP gas stations.