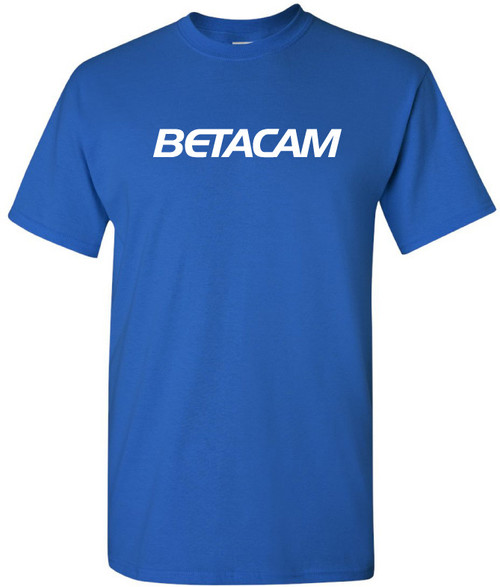 Draw attention with this cool and trendy retro Betacam Shirt!! Betacam is a family of half-inch professional videotape products developed by Sony from 1982 onwards. In casual use, "Betacam" singly is often used to refer to a Betacam camcorder, a Betacam tape, a Betacam video recorder or the format itself. All Betacam variants from the original (plain) Betacam to Betacam SP and Digital Betacam, use the same shape cassettes, meaning vaults and other storage facilities do not have to be changed when upgrading to a new format. The cassettes come in two sizes: S and L. Betacam cameras can only load S tapes, while VTRs can play both S and L tapes. The cassette shell and case for each Betacam cassette is colored differently depending on the format, allowing for easy visual identification. There is also a mechanical key that allows a video tape recorder to tell which format has been inserted. Betacam Sony Pro Video Retro Vintage Camera Format Cool and Trendy T-Shirt (white on royal)