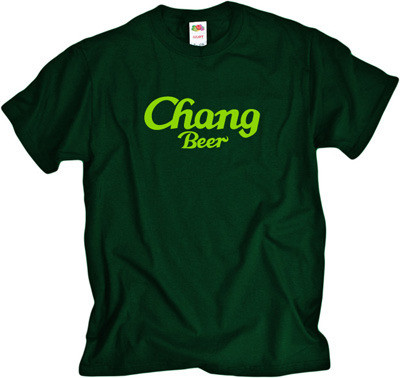 ThaiBev brews Beer Chang, a pale lager. Chang is the Thai word for elephant, an animal that has cultural and historical significance to Thailand. The logo for Chang Beer features two elephants facing one other. Chang is brewed for the domestic market at 6.4% abv; and for the export market at 5% abv. However, the two "versions" are in fact different beers, the export beer being a 100% malt beer like its domestic draught product, while the Beer Chang sold in-country in Thailand contains some rice. In 2004, the company introduced Archa beer, at 5.4% alcohol by volume (abv). The beer won a gold medal at the 2007 Australian International Beer Awards (AIBA). In 2006, the company launched Chang Light, 4.2% abv, and Chang Draught in bottles, at 5% abv. Chang Lager Beer Thai Beverage CompanyT-Shirt