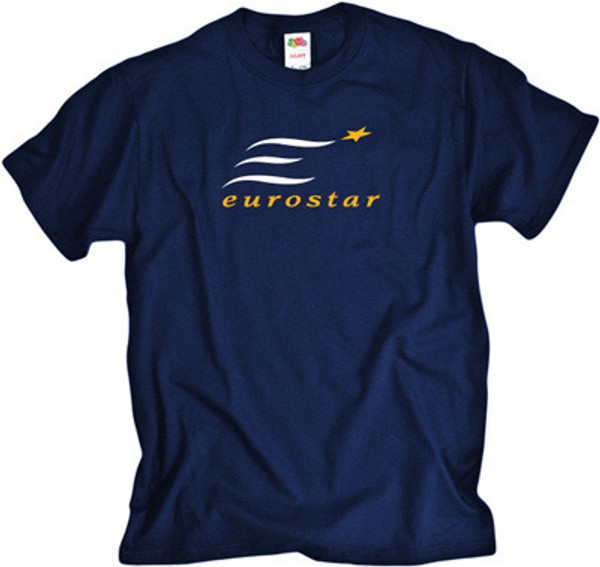 Eurostar is a high-speed railway passenger service connecting London with Paris and Brussels. All its trains cross under the English Channel via the Channel Tunnel between Britain and France, owned and operated separately by Eurotunnel. The Channel Tunnel used by Eurostar services holds the record for having the longest undersea section anywhere in the world, as well as being the second longest tunnel in the world. A Eurostar Class 373 train set a new British speed record of 334.7 km/h (208.0 mph) on the first section of High Speed 1 on 30 July 2003. The London terminal is St Pancras trains pass under the Channel to points in France including special destiations of Euro Disney and Tourist destinations in the south of France. The service is operated by the eponymous eighteen-carriage Class 373 trains which run at up to 300 kilometres per hour (186 mph) on a network of high-speed lines. The LGV Nord line in France opened before Eurostar services began in 1994, and newer lines enabling faster journeys were added later — HSL 1 in Belgium and High Speed 1 in southern England. The French and Belgian parts of the network are shared with Paris–Brussels Thalys services and other TGV trains. In the United Kingdom the two-stage Channel Tunnel Rail Link project was completed on 14 November 2007 and renamed High Speed 1, when the London terminus of Eurostar transferred from Waterloo International to St Pancras International.

Eurostar is operated by the national railway companies of France and Belgium, SNCF and SNCB, and by Eurostar (UK) Ltd (EUKL), a subsidiary of London and Continental Railways (LCR), which also owns the high-speed infrastructure and stations on the British side. Eurostar has become the dominant operator in cross-channel intercity passenger travel on the routes that it operates, carrying more passengers than all airlines combined. Other operators have stated an interest in purchasing EUKL, or starting competing services following deregulation in 2010. Most recently Eurostar had to deal with problems with snow causing a short circuit service was suspended for 3 days. Some passengers were trapped in the tunnels with no water food and in darkness until rescued.

Eurostar is a member of Railteam, a marketing alliance formed in July 2007 of seven European high-speed rail operators, including Thalys. The alliance plans to allow tickets to be booked from one end of Europe to the other on a single website. In June 2009 London and Continental Railways, and the Eurostar UK operations they held ownership of, became fully nationalised by the UK government.