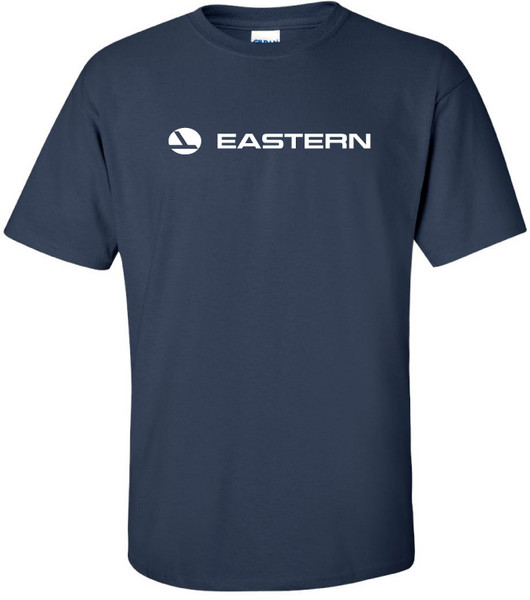 A totally crazy cool men's logo tshirt design from Interspace180 t-shirts! This quality shirt print is one of our many famous, funny, pop-culture history tee shirt relics from the 70’s, 80’s, 90’s and today.

Founded in 1926 as Pitcairn Aviation, it flew government contracted airmail runs using single engine aircraft. It was purchased in 1929 by Clement Keys, who then changed the name to Eastern Air Transport in 1930. It would soon become known as Eastern Airlines (1934). Eastern was purchased again in 1938 by Eddie Rickenbacker, the famous WWI Flying Ace. Former astronaut Frank Borman took over in 1980 as CEO, and in 1982 Eastern acquired Braniff Airline's southern route. In 1986, Borman sold the airline to Frank Lorenzo, who later sold off its shuttle service to Donald Trump. What a story! This logo first appeared around 1964 when Eastern began changing their plane's livery design. Often referred to as the "hockey puck" design, it was used virtually unchanged until the company's last operational flight in January, 1991. Official carrier of Walt Disney's Disneyworld, Eastern Airlines had an attraction at the park called If You Had Wings. Eastern Airlines Logo Aviation Fan Tshirt (white on navy).