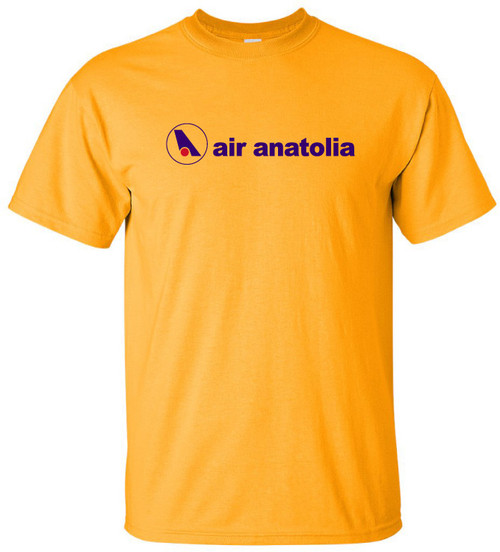 A totally crazy cool men's logo tshirt design from Interspace180 t-shirts! This quality shirt print is one of our many famous, funny, pop-culture history tee shirt relics from the 70’s, 80’s, 90’s and today.

Air Anatolia (Turkish: Anadolu Havaçilik A.S.) was a charter airline based in Istanbul, Turkey. It began flying in 1996 and closed in 2003. The airline's network expanded from the Middle East to Europe. By 2002, the airline had run into financial stress, and some of their airplanes began to be sold to other airlines. By 2003, all planes were sold (for example to Fly Air), and the airline's management decided to close the airline.

Air Anatolia was commonly known as Anatolia, and was associated with Sultan Reizen, formerly GTI Airlines Inc. Its bread and butter were holiday seekers and Anatolia profited of the growing popularity of Turkey as a summer holiday destination. Other traffic concerned the so-called "visiting friends and relatives", Turkish people who moved to countries such as Germany and the Netherlands visiting their family and friends in Turkey.